To those parents out there, I feel for you. Especially those with the young ones that can’t stay home by themselves. Date nights come rarely, not because I can’t find babysitting, it is because I don’t force my husband to go out with me.  The key is to force your significant other to go out with you. Create a plan and execute. My plan of action was a couple of tickets to the current show “A Hammer, A Bell and A Song To Sing” at the San Diego REP and dinner at the neighborhood nicer restaurant, The Vine Cottage. Here is the low-down: 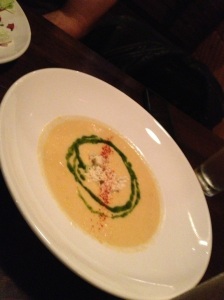 The Vine Cottage is very quaint little restaurant. It is a little gem in La Mesa. Their food is delicious and they have a great beer and wine selection. We had the corn chowder with crabmeat, a Baby Iceberg Wedge Salad w/ Maytag Dressing (split mine with the vinagrette) and I had the Creekstone Farms Sliced Flank Steak and he had the The Vine Cottage Grass-Fed Beef Burger. Everything is seasonal, all-natural, organic, locally-sourced, and sustainably produced ingredients whenever possible, which makes it very cool for being in the not “hip” part of San Diego (i.e. North Park) plus they have a great wine and beer selection. In the future, I hope to catch more of their happy hours, you can’t go wrong with half off salads and pizzas. My favorite focal point was watching Anthony Bourdain on the framed television sets, one located above the bar and one little one as you walked in seen below, the televisions are Pinterestable. 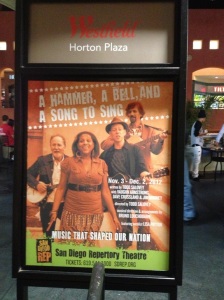 For the next leg of our date, we headed down to Horton Plaza to attend the show. “A Hammer, A Bell and A Song To Sing”,  but first we took a detour to the Ben and Jerry’s and the Cinnabon at the food court. Yep, dessert and a little window shopping, Christmas can never come too early for retailers. The shows are very unique and are usually originals. “A Hammer, A Bell and A Song To Sing” is the story on the songs that came from the American Revolution, the Civil Rights Movement to the Occupy Protests, essentially it was a folk song musical. I thoroughly enjoyed the interactive portions of the show. The cast of 4 are a talented bunch; each actor played multiple instruments, acted, and sang, which are not easy to do for a hour and a half non-stop. Last season, I attended The Great American Trailer Park Musical  which was not like the “A Hammer, A Bell, And A Song to Sing” at all but that is what makes these shows great, you never know what will be on stage next. Just like their mission, the REP  makes good theatre, there is always something intimate and provocative about their shows. I look forward to catching more shows in the 2013 season. “A Hammer, A Bell and A Song To Sing” ends on December 2.